Today, Philadelphia Eagles head coach Andy Reid was fired. It was a day that everyone knew was coming and even many Reid supporters admitted was necessary. Coach Reid gave 14 years to a city that I love. I am sad to see coach Reid go. Mainly because of familiarity and the fact that I really wanted him and the Eagles to win a Super Bowl. Also I really don’t want the Eagles to ride the coaching carousel for the next ten years. From all accounts Reid is a very good human being. His former players love him. I take their word because they know him better than the press or fans. I have never sent an athlete, celebrity, or politician any personal message. However, today, I mailed coach Reid a card to let him know that his hard work was very much appreciated by this Eagles fan. 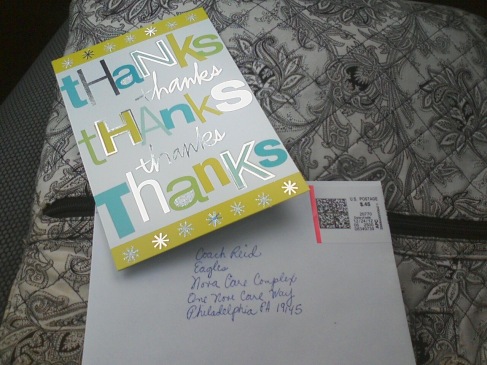 On October 14, 2012, the Philadelphia Eagles lost a football game.  They lost in overtime after leading by 10 points with 5 minutes to go. In the aftermath of this loss everyone had a comment including many Eagles players. ProFootball Talk writer, Darin Gantt wrote an article highlighting some of the players’ comments. All articles on ProFootball Talk allow us readers to make comments. Many of the comments are knowledgeable and well thought out. Some comments are rambling and incoherent. Then there are comments like the one below.

The eagles have won how many superbowl’s? Right…and, they’re relevant, why? Fans and city as disgusting as the team’s play…

When I see these type of comments I am slightly offended. I say slightly because sticks and stones right? Anyway as a native Philadelphian and a fan of all Philly sports team, this person is calling me and my city disgusting and I am wondering why? Yes, Philly has a reputation for booing santa in 1968 and cheering when Michael Irving got hurt. I watch a lot of sports and see and read about bad things happening at stadiums all across the country and world. Yes Philly fans have behaved badly, but so have a lot of fans. Anyway, why make the leap that all the fans and the entire city is disgusting? Is Philly perfect? No! Is it clean? A few parts are! Despite its flaws, I see so much beauty, art, culture, and history in Philadelphia and many American cities (like New Orleans and Detroit). The person who called Philly disgusting has inspired me to show another side of the city that I love. Through a series of photos, I would ask open minded people to explore a surprising side of a city that you think you know. Stay tuned. To the person who thinks Philly is so disgusting, I would love if you respond to my comment below:

novoodoo4409 – What makes the city of Philadelphia and the fans so disgusting?

I am a football fan who supports the Philadelphia Eagles. Most of my post will probably state my observations and opinions of the Eagles and the NFL. On occasion I might throw in a thought or two about the Sixers or other Philly teams.